by cfr
Is it possible to add a new component to the primefaces extensions called p:statusBar which is based on the code of the progressBar in version 3.1 of primefaces? I am using the progressbar in my application to display some limitations like 2/10 uploadable files. So it is used to display a current status. Before the reimplementation of the progressbar, I could update the values by updating the component or the form. Now it seems that I haven't got the possibility anymore to use the progressbar in combination with a value from a backing bean without ajax.

Is it possible to contribute to primefaces extensions? What do I have to do to work with you on new components?

by Oleg
Hi and welcome,

Yes, it's possible to contribute. But any new component should be more or less unique and should not have "extends SomePrimeFacesComponent" or large copy-paste snippets. All widgets are unique too, without reusing of PF widgets, except BaseWidget. Think about maintenance from release to release. We only use core stuff and not overwrite PF stuff.

Can you describe (shortly) please what p:statusBar should do different in comparison to p:progressBar? A status bar can be normally implemented with standard JSF stuff. Does it do more than value displaying? A use case would be good. Thanks! 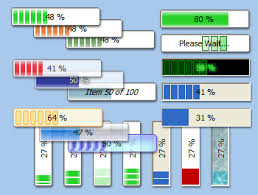 Which component of the standard JSF stuff could be the base to do it just with JSF?

by tandraschko
whats the difference between 3.2 and 3.3 progressBar?

by tandraschko
why not create an feature request for this in Primefaces?

by cfr
There are some reasons. First of all I need a quick solution. I thought that the fastest way would be to copy the code of the progressBar from version 3.1.1 of primefaces and build a new component in the primefaces extensions. The reimplementation of the progressBar should remove the jQuery based solution. So I think that they do not want the code in the primefaces code anymore. Even if it would now be the p:statusBar. Another reason of mine is, that it could be useful to understand how a new component can be added to the primefaces extensions and how to contribute own components if there are appropriate. There are more users than just me, that were using the progressBar as a statusBar:
viewtopic.php?f=3&t=19165&p=62346#p62346

The ticket underneath got the status "won't fix". I am not sure if a new ticket with a feature request would be handled different to this ticket:
http://code.google.com/p/primefaces/iss ... il?id=3707

And progress should be updated permanently. A status bar is static and gets value from bean. I need this component too actually. We have a Struts project with nested DIVs simulating a status bar (as relevance for found hits after a special search). I propose to create an issue ticker in our issue tracker and I will take care about it. But not in the upcoming 0.5 release. In 0.6. Please create an issue ticket http://code.google.com/p/primefaces-ext ... ssues/list

Just two questions yet. Do you need customized images inside status bar like progress bar? Do you need JS method to set value?


Do you need customized images inside status bar like progress bar?

The image I am using is specified by CSS. I do not need a special attribute to set an image.


Do you need JS method to set value?

by Oleg
Ok. I propose then we implement a simple pe:statusBar without widget. As output component. No input. What do you think about pe:outputStatusBar? Prefix is similar to h:outputText, h:outputLabel, h:outputFormat.

I would use it as follows in my DataTable:

I don't know by the way if we need "labelTemplate" attribute at all. Because it's not flexible. You can only show value and not e.g. 2/10. We can introduce another attribute "label" in addition to "labelTemplate". You can bind then any label from bean: label="#{statusBarBean.label}". What do you think?

We can also call it pe:outputProgressBar. Because the word "status bar" has a little bit another semantic.
All times are UTC+02:00
Page 1 of 4
Powered by phpBB® Forum Software © phpBB Limited
https://www.phpbb.com/